Shopping Basket
Your Basket is Empty
Quantity:
Subtotal
Taxes
Delivery
Total
There was an error with PayPalClick here to try again

Thank you for your business!You should receive an order confirmation from Paypal shortly.Exit Shopping Basket

"The room that was"

The journey of converting of a traditional classroom that has been set up as a computer laboratory a mere 20 years ago into an innovative 21st century learning space is nothing but epic. I have been reading quite a lot of material in regards to how redesigning classrooms can lead to a boost of student retention, engagement and learning (as per the article below), so I set out (with the executive staff at my school) to begin my own journey.

I was determined to set myself on a journey of converting this standard classroom with 20 desktop computers (and 10 very old laptops) into a place where students can move around, create, collaborate and showcase their work. As you can see below, students are confined to a space and there is very limited room between them making it very difficult for students to work together on a task. The room design also prevented me as their teacher to have continuous eye contact as everyone was facing the walls (their PCs) - a dated design concept considered as 'educational' so that teachers could see if students were actually doing the right thing when on their computers.....a task that teachers clearly needed to do in the past!

This room design also made it very difficult to have 30 grown teenagers in the room as space was extremely limited due to the 3 oversized tables in the middle of the room. 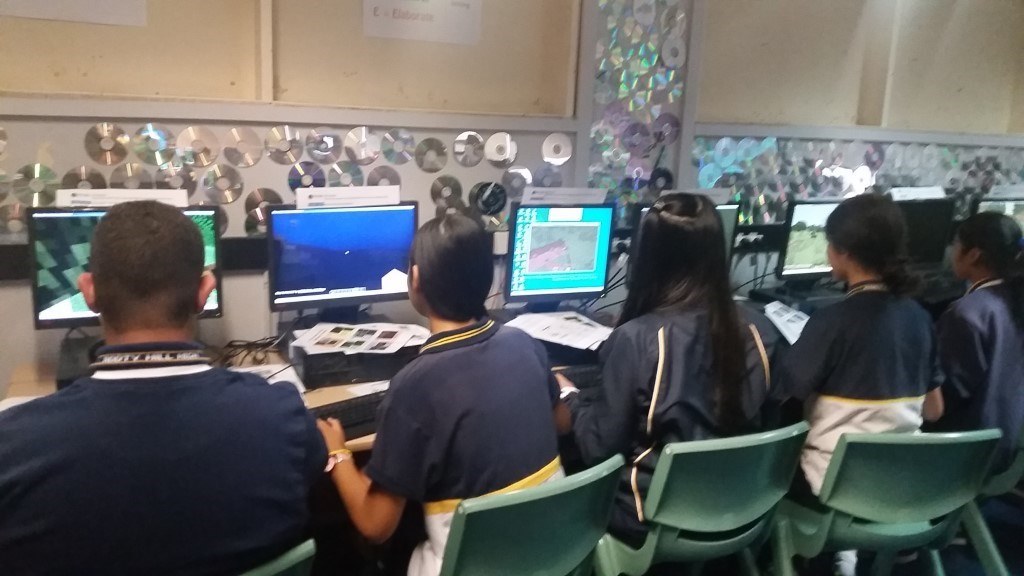 I have attended many workshops on the importance of the design a learning space and have used all of this information in my own design process.  In addition to all requiring new furniture to make these learning opportunities eventuate, it is also critical that the room itself is updated. The classroom desperately needs a paint and new carpet. Over the years, I have attempted to cover the walls with CDs, posters and the like, but as any teacher knows, these slowly fall of the walls and their original secrets are once again on display. 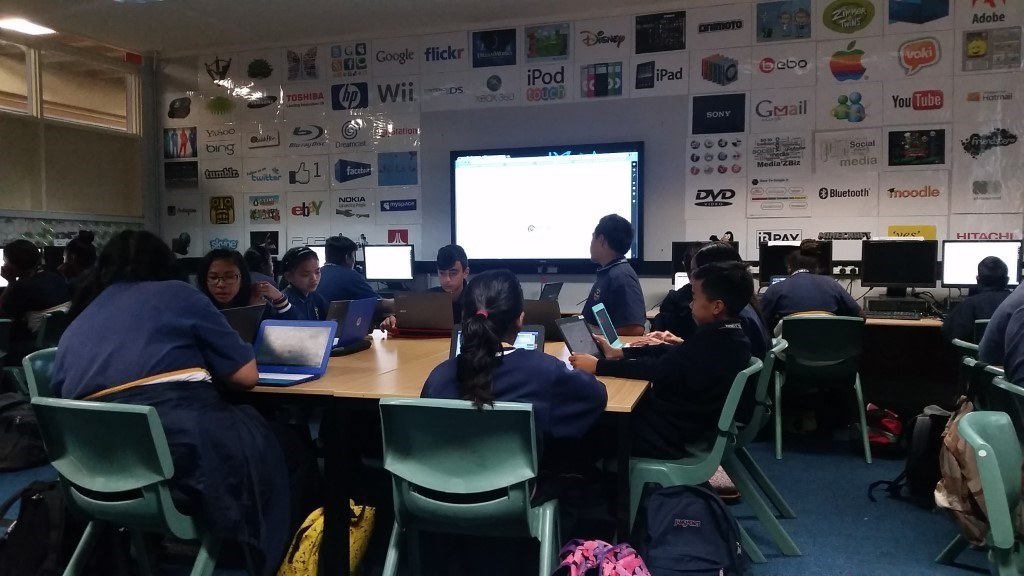 Once a commitment was made to refurbish the room, the room was emptied and every was stripped off the walls.

The room would be painted and recarpeted

The first step is to empty the classroom. All of the posters were removed from the walls and all of the computers and desks also moved out. 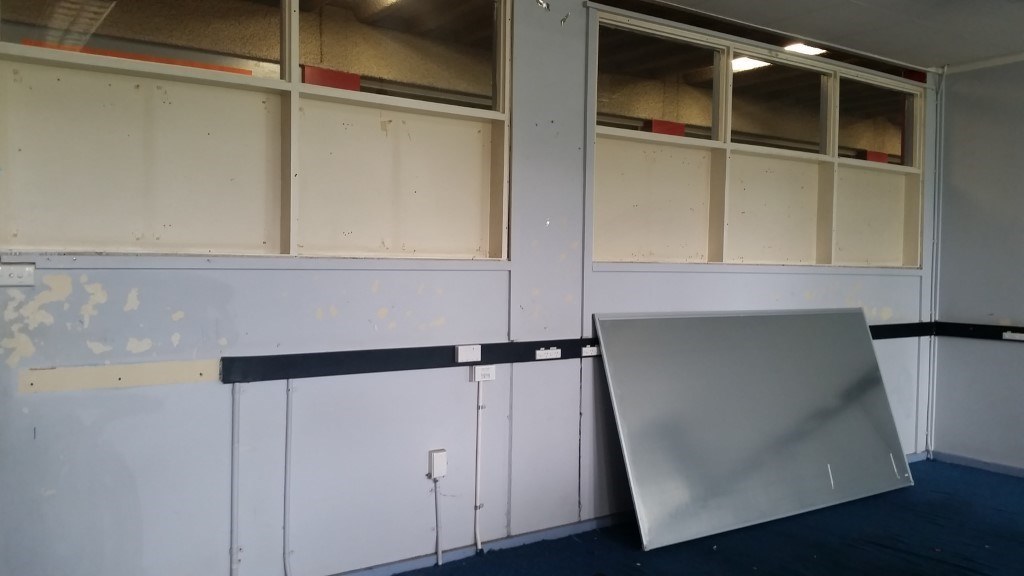 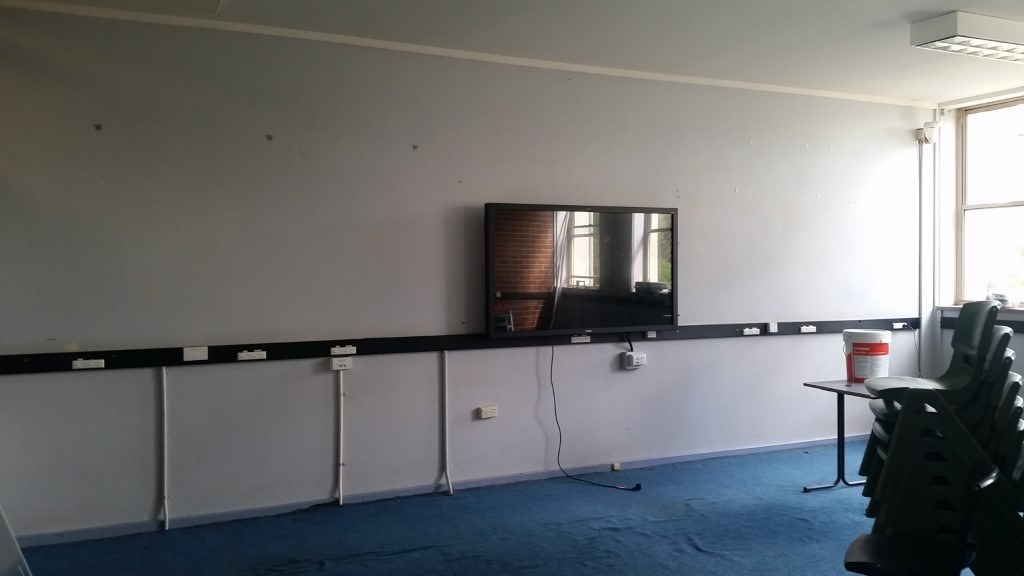 Now that the room is stripped bare, it can be painted and re-carpeted. A new work bench is also built and secured to a wall as are two whiteboards which are placed either side of the Touchscreen TV 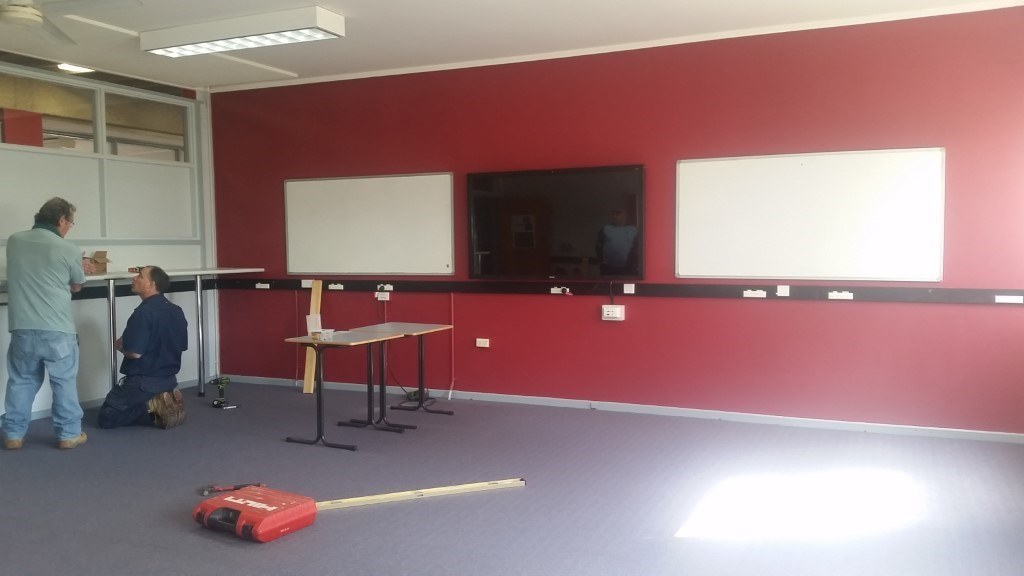 This room is predominately used for ICT based subjects. This played a pivotal role in the design of the classroom. Then first major decision  was to decide which of the room would be the 'front' of the room. It was decided due to the layout of the room, the glare from the windows and the positioning of the door, that the front of the room would be away from the door.

A work bench was custom built to provide students with the opportunity of working autonomously. This space is necessary particularly for older and GAT students.

Then it was time for the furniture to arrive and be installed into the classroom. The first pieces to arrive were the ottomans and lounges. As the main pieces of furniture have not yet arrived, nor have the new laptops, some of the original furniture and desktop computers were placed back in the room for the interim. 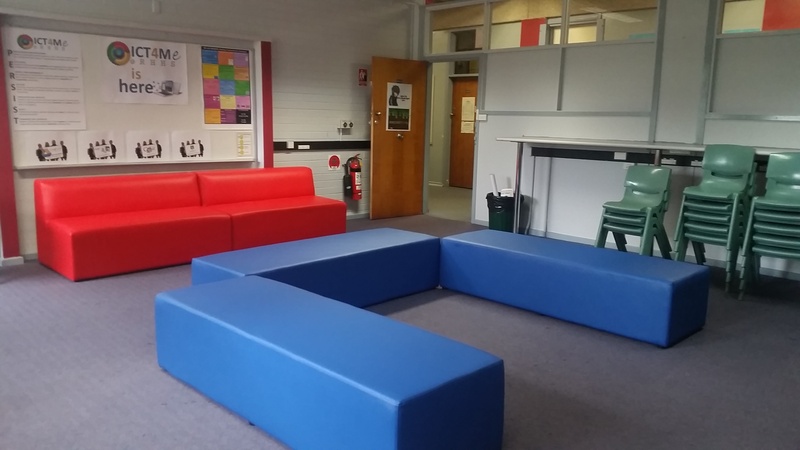 Then the stools arrived. The room is really coming together and finally becoming functional and practical. Students are more excited that they no longer need to stand to do their work 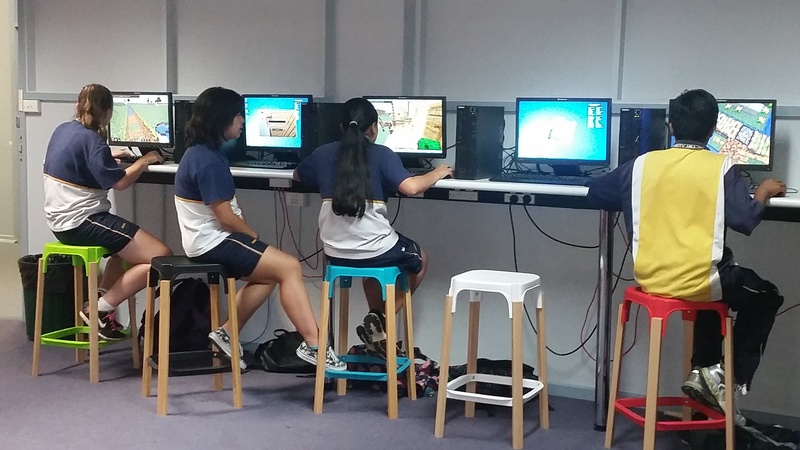 Our new student table which is perfect for collaboration 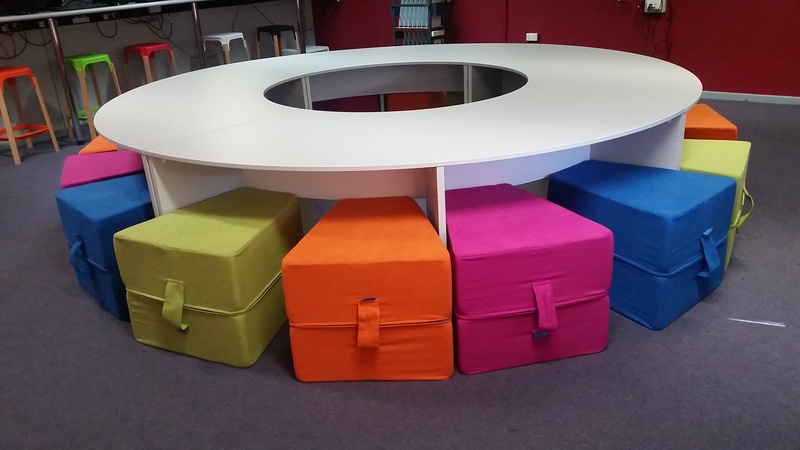 And of course, it wouldn’t be functional without my very own teaching pod 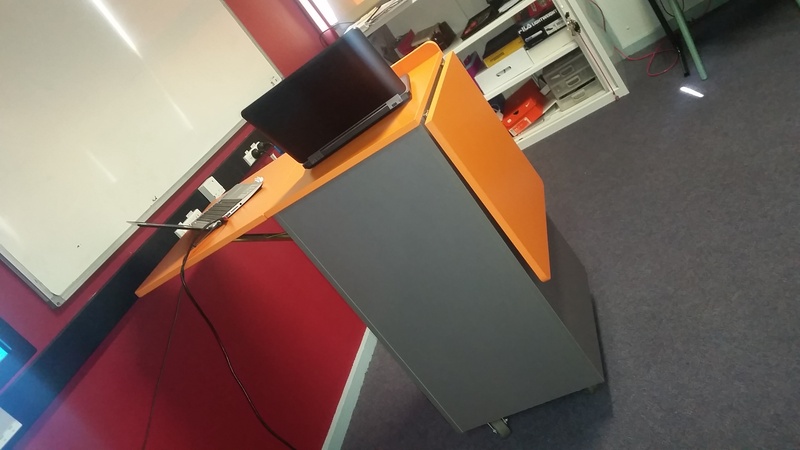 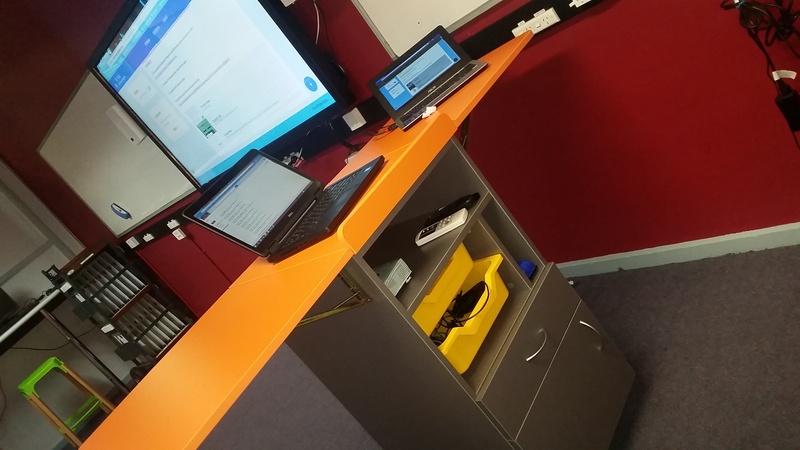 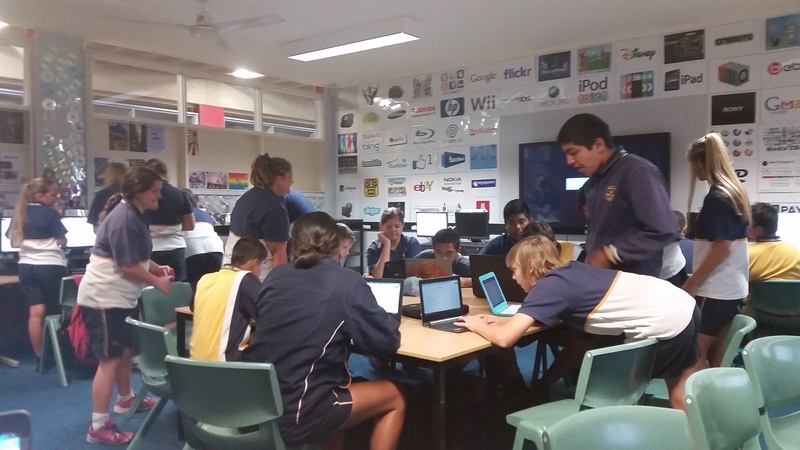 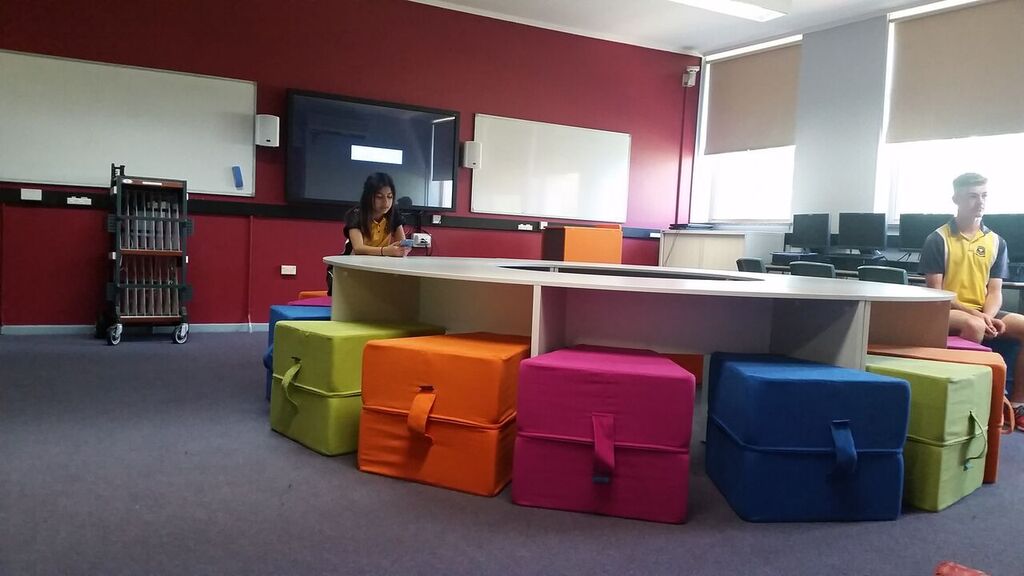 New research published by Salford University has suggested that the layout, construction and design of classrooms has a significant impact on achievements in reading, writing and maths.

The researchers stated that among the most important elements within the design of a classroom were natural light, air quality, temperature and having individualized classroom designs.

According to the study, whole-school factors, such as the size of the school itself, or the facilities provided, had less impact on attainment than the design of individual classrooms.

The findings, carried out by researchers from Salford University with funding from the Engineering and Physical Sciences Research Council, carried out detailed assessments of more than 150 classrooms across 27 ‘very diverse’ schools in a three year period.

The study’s findings suggest that differences in the physical design and characteristics of the classrooms assessed could explain 16% of the variation in learning progress over the course of a year, found between the 3,766 pupils who were involved in the research.

To put this in to perspective, the researchers claimed that the impact of moving an ‘average’ pupil from the least to the most effective classroom space would be an increase of around 1.3 sub-levels within the national curriculum. Students typically progress at a rate of around two sub-levels per year, and so this represents an additional gain of more than 50%.

In terms of what makes a classroom ‘well-designed’ in relation to learning performance, the three key areas were:

Of the above, around half of the total impact came from the final element – naturalness. The key aspects of naturalness were air quality, temperature and natural light.

Positively for the teaching community, the report’s authors felt that many of the elements they have identified can be controlled and altered by teachers in the classroom. Small changes, which would cost little or nothing to implement, could have a large impact – for instance, changing wall colors, the layout of tables within the room and the posters etc. displayed on walls.

The full report has been published by Salford University and is available here: Clever Classrooms Report

The full presentation of this blog can be found at https://sway.com/TdHhLRzGnrl9rL6H